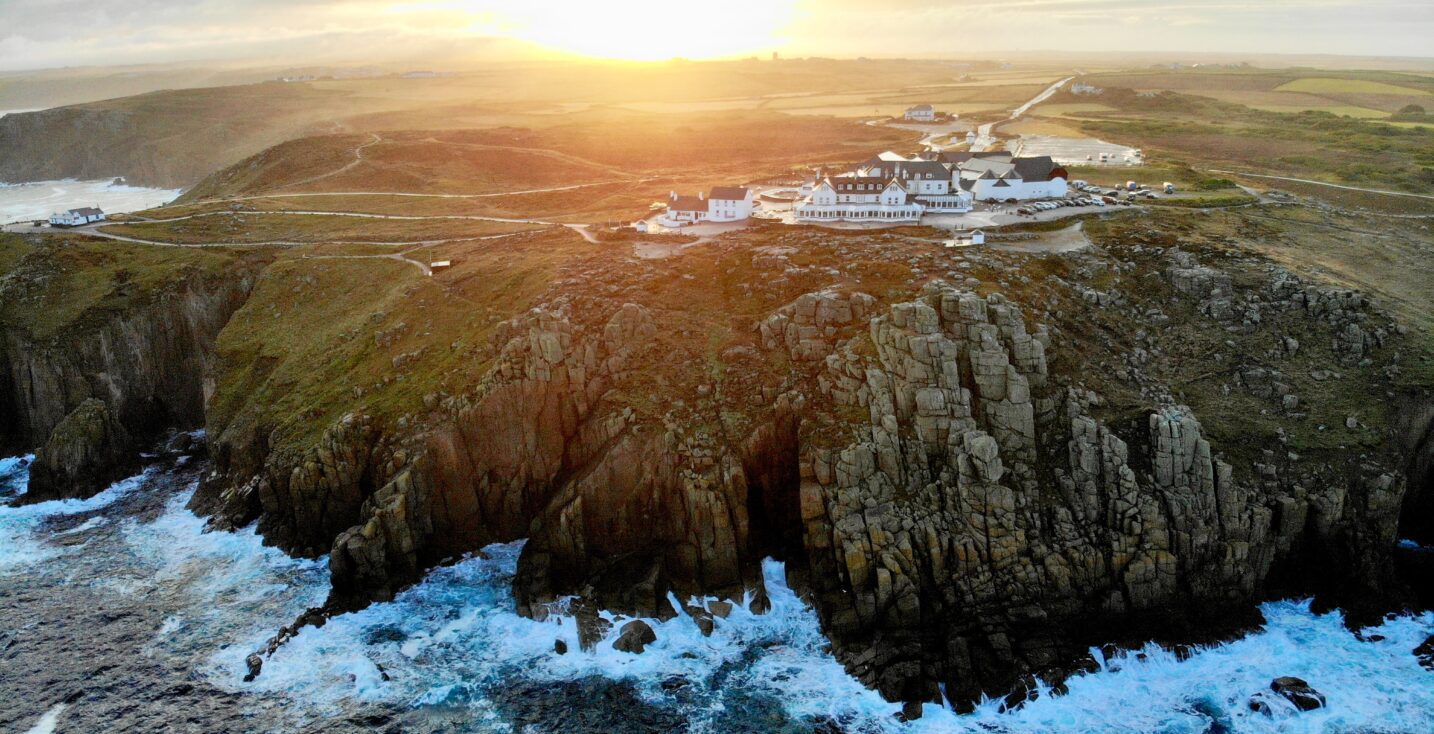 Why is the geology of West Cornwall so important and what are the main features?

The rugged coastline of west Cornwall is now all that remains of a huge mountain range, some 5000 metres high, that was formed about 300 million years ago. This mountain range extended across South West England, as well as elsewhere around the world. Countless millennia of erosion have left a landscape that is a far cry from mountainous, but reveals what was happening deep underneath those mountains, in the distant past. Most notably, we have the formation of the Land’s End granite. This is part of the huge Cornubian batholith, which is the source of granites from the Isles of Scilly all the way up to, and including Dartmoor. Land’s End granite makes up most of west Cornwall, in fact it is the only part of Cornwall and Devon where the majority of the coastline is comprised of granite. 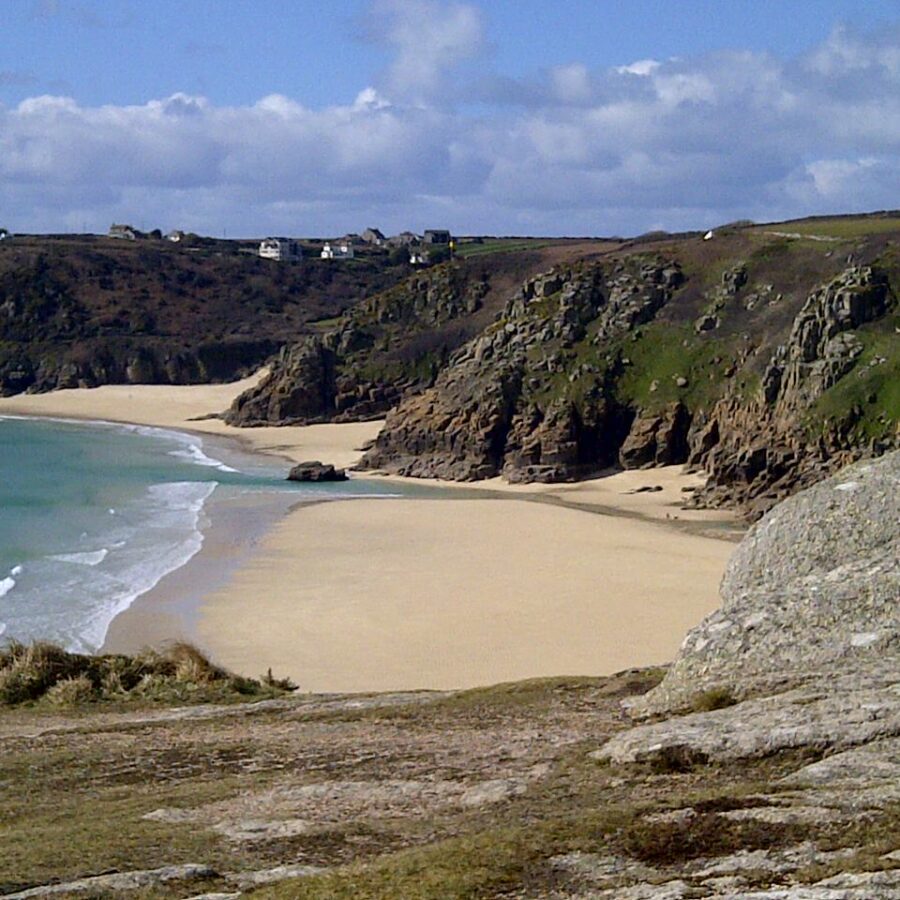 How have these features shaped the coastline and what should visitors look out for?

The predominance of granite on the Land’s End peninsula creates a very distinctive coastline, quite different from the rest of Cornwall. The results are majestic golden cliffs with their characteristic castellated profile. This sets west Cornwall apart from the rest of the county, in fact its granite coastline is, by many, considered to be the most beautiful. The absolute crown jewel of the county is the stretch of coast from Land’s End to Porthcurno, including what may be the UK’s most beautiful beach – Pedn Vounder, at Porthcurno. Once a secret, secluded beach, social media has changed this forever, and it’s easy to see why; on a sunny day, it could easily be mistaken for the Caribbean! 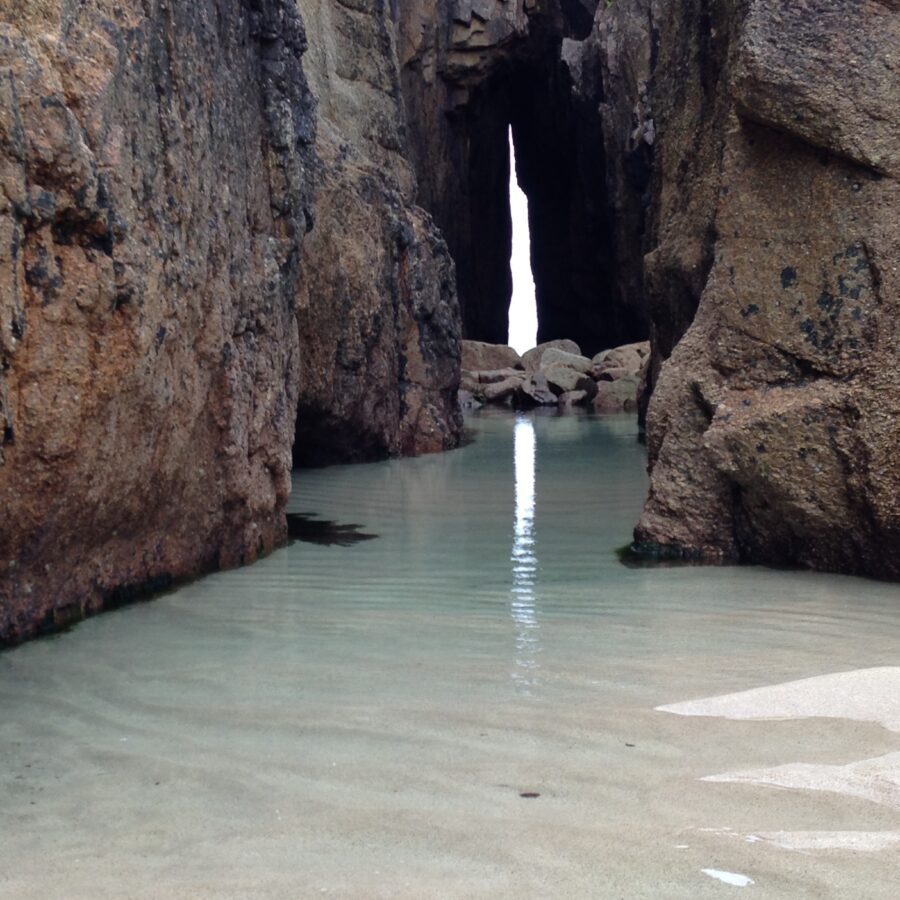 Porth Nanven cove, at the end of Cot Valley, is also of geological note. This beach is often referred to as the ‘dinosaur egg’ beach for the ovoid boulders that cover its shores. These rocks, although shaped and deposited by the sea, were not done so in recent times. They have actually come from an ancient beach, which you can see deposited in cliffs at the back of the beach suspended in animation some 120,000 years ago.

Other stops worth looking out for are the towering cliffs of Land’s End, or the relatively hidden beach of Nanjizal. One of the best ways to enjoy this coastline is to tackle a few miles of the South West Coast Path, as every cove and carn is worth a visit! 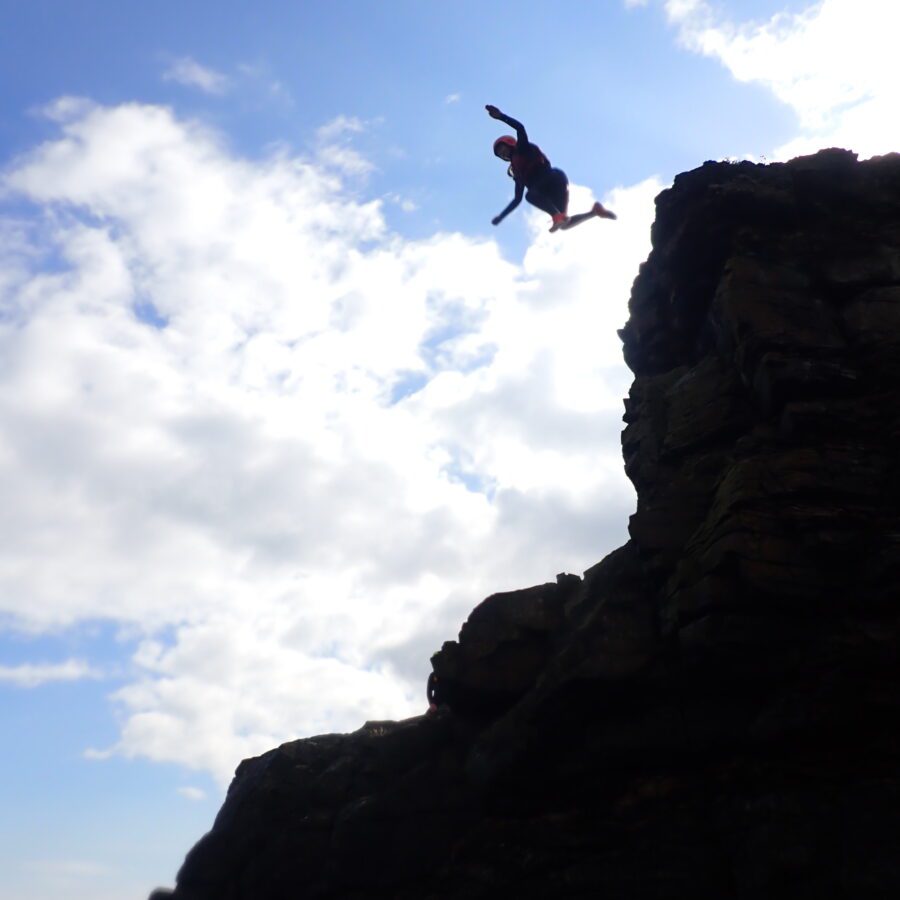 We hear there is an alternative way to discover this stretch of coastline….can you tell us more?

An even better way to really experience the coastline of Cornwall is by coasteering. This is an activity that allows you to access places unreachable by any other method and is an adventurous way to get a totally unique perspective of the coastline. It’s a combination of many activities, including swimming, scrambling over the rocky foreshore, and exploring sea caves and arches, but above all, it is best known for its cliff jumps. Whilst there is no requirement to jump into the sea when coasteering, if you want to get that adrenalin pumping, jumping off a rocky ledge on the Cornish coast into the Atlantic will be sure to do the job! 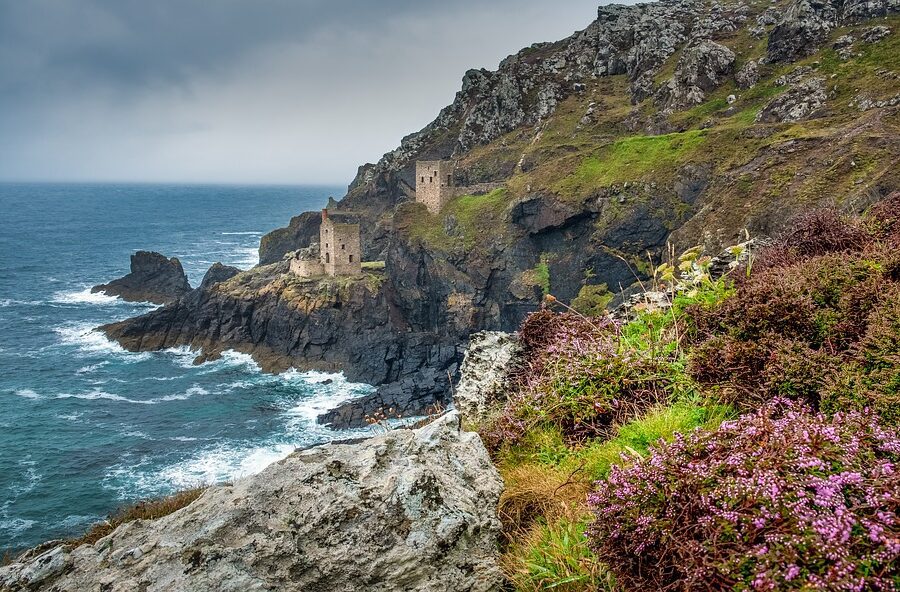 West Cornwall is peppered with the relics of Cornwall’s mining heritage. How does this relate to its geology?

It’s all about the granite! The emplacement of the huge body of granite beneath west Cornwall and the mineralisation of the granite and surrounding rocks associated with these events led to the formation of immense mineral wealth. This led Cornwall to become one of the most important producers of metals in Britain throughout the 17th, 18th, and 19th centuries. At its peak, Cornwall was regularly producing over half of the country’s non-ferrous metals (i.e. everything except iron). Cornwall produced a lot of different metals, including copper, lead, zinc, tungsten, and even uranium. However, it is most famous for its tin mines, and there was a time – in its heyday – that Cornwall was a world-leading tin producer.

To the untrained eye, the effects of the Cornish mining industry are still obvious. Ruins of the iconic engine houses, which housed steam engines that would pump shaft and haul materials, still dot the landscape. None of these are more iconic the Crowns Mine engine houses at Botallack. Perched just a few metres above the sea, these engine houses are one of Cornwall’s oldest tourist attractions. As far back as the mid 19th century, people travelled from far and wide to marvel at these unlikely structures. Visitors included French aristocrats, Russian admirals, and even the Prince and Princess of Wales (later King Edward VII and Princess Alexandra).

Aside from these more obvious reminders, Cornwall’s mining industry has left a permanent mark on almost every part of Cornwall. There is barely a valley or area of moorland where someone didn’t try and sink a mine, with the hope of striking riches ‘below grass’. Instead of the idyllic Cornwall we know today, picture an industrial wasteland. Entire valleys would have been covered in discarded rock spoil, often heaved into gigantic terraces. Earth was moved to make way for engine houses and tin dressing plants. Smoke would have belched, and there would have been the constant noise of men, women, and their machinery.

Cornwall has had a hundred years to recover from these scenes, and vegetation has largely reverted the landscape back to its ‘natural’ state. But if you get your eye in, under the bracken you can still clearly see evidence of the mining industry everywhere: horizontal features and inconspicuous terraces now masked in foliage; the remnants of horse whims and water leats. All of these betray the bones of an industry that, in so many ways, shaped our county.

Is it possible to explore Cornwall’s underground mining world?

Cornwall Underground Adventures are the only providers of guided mine exploration in, not just Cornwall, but the south of England. It was the idea of two keen mine explorers who wanted to share their passion for exploring Cornwall’s hidden subterranean world with other people. Their aim was to offer experiences that were as close to authentic mine exploration as possible.

What they offer differs from the small handful of ‘show mines’ that it is possible to visit around the county. Instead, Cornwall Underground Adventures offers you the chance to visit an abandoned mine in the exact condition it was left when the miners downed tools, a hundred years ago or more.

Using caving equipment and techniques, it is now possible to venture deep underground to witness first-hand what the Cornish miners created all those years ago. It is the perfect combination of adventure and adrenalin, as well as an interactive history lesson. After all, the only way to truly understand life underground for a Cornish miner, is to go underground and see it for yourself.

Cornwall Underground Adventures offer a range of experiences, from entry-level trips, to more challenging experiences involving abseiling and underground climbing routes. They run their trips in mines near St. Just, in the far west of Cornwall.

Discover our beautiful homestays in Cot Valley near St Just … 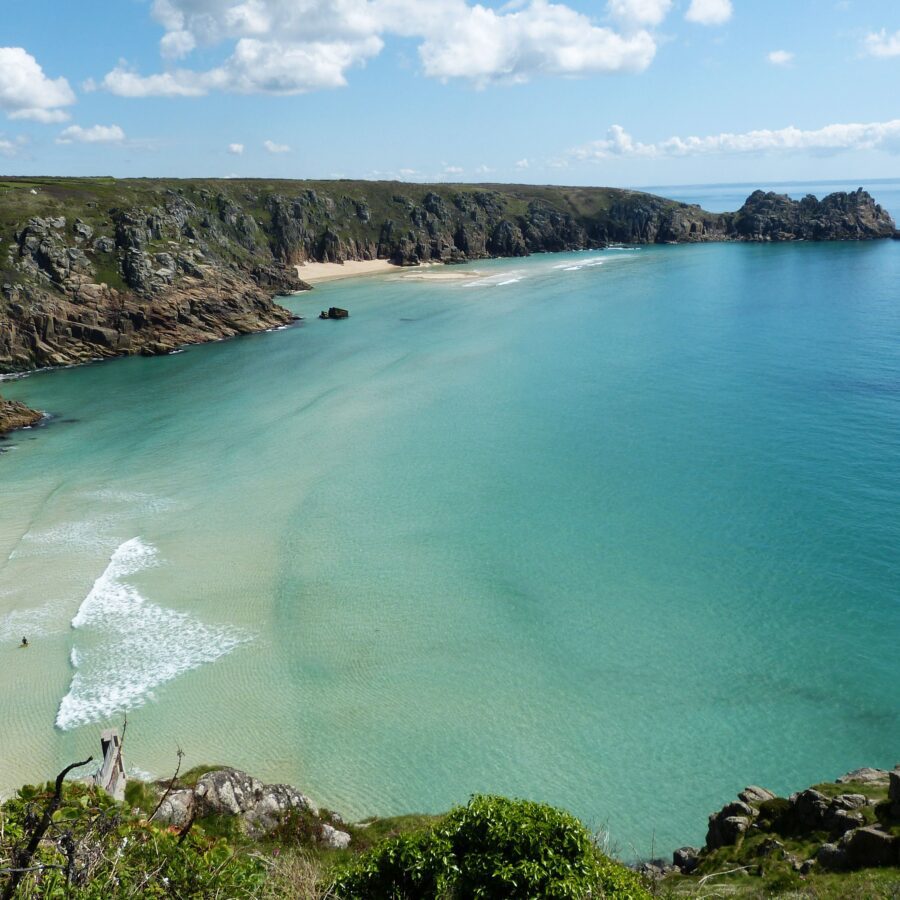 Nestled into the hillside, this gorgeous traditional cottage for four is the perfect bolthole for getting away from it all.  Visit in February / March and take advantage of our Special Offers. Good availability throughout 2022.

You’ll find this stunning property for seven at the end of a quiet lane hidden away in its magical surroundings.  Only available for 8 weeks over July & August so be quick and book now!

If you’re looking to enjoy subtropical splendour, a magical garden and stunning views then Brook Cottage, sleeping five, ticks all the boxes and is dog-friendly too! We still have availability from June onwards.